Welcome to the Digital Sportspage forum.

Will be getting the Deluxe Edition.
Top

"Dirt Rally 2.0 - whose name subtly references Colin McRae Rally 2.0, another much-loved Codemaster classic - will benefit from the official World Rallycross Championship licence and eight official WRX tracks and will also feature New Zealand, Argentina, Spain, Poland, Australia and the USA as locations. It will be without original game director Paul Coleman, though, the man responsible for the hardcore focus of the original Dirt Rally having left Codemasters back in June this year."

Probable Day One purchase for me, although the departure of Paul Coleman is concerning. I sure as hell hope Codemasters doesn't water down this series or attempt to make it DIRT 5. DIRT 4 was not a good game.
"You know why I love boxers? I love them because they face fear. And they face it alone." - Nick Charles

If it is a true successor to Dirt Rally, complete with VR it is a buy. If Dirt 5 it's a pass. My fear is the latter.
Top

F308GTB wrote:If it is a true successor to Dirt Rally, complete with VR it is a buy. If Dirt 5 it's a pass. My fear is the latter.

I need that VR too. I don't wanna go back to flat screen racing.
XBL-Naples39; Steam-scrub47; GameCenter-MasterOnion39;
Top

Teal wrote:Dirt Rally with a WRC license?? Holy-wait. Gotta see if they muck it up like Dirt 4...

It's the WRX -- World Rallycross -- license, not WRC. Fun, but not the majesty of the WRC.
"You know why I love boxers? I love them because they face fear. And they face it alone." - Nick Charles

Teal wrote:Dirt Rally with a WRC license?? Holy-wait. Gotta see if they muck it up like Dirt 4...

It's the WRX -- World Rallycross -- license, not WRC. Fun, but not the majesty of the WRC.

More gameplay details and hands-on impressions in this video:

https://www.youtube.com/watch?v=DS7JHernQRg
"You know why I love boxers? I love them because they face fear. And they face it alone." - Nick Charles

VERY encouraging news about the sim traits of DIRT Rally 2.0: There will be no easier "Gamer" handling setting like in DIRT 4.

"You know why I love boxers? I love them because they face fear. And they face it alone." - Nick Charles

Most of the news on DiRT Rally 2.0 is encouraging, however, the lack of venues, particularly no Monaco, Sweden, Wales/GB, Finland. That is painful. I hope that is somehow added as DLC. Wish Codemasters could just get the WRC license and give us the ultimate rally game.

Uhg, no VR at launch. VR for DiRT rally is so good that I can't play it very long without feeling sick, in a good way.

Yeah, no VR is a tough sell for me.

I can't properly explain to anybody how cool it is to come flying up at a hairpin, pull the handbrake to pirouette around an inside rock, and lean my head out to the window to look straight down and see exactly how close I'm cutting it. That moment early on in my Dirt VR career was all I needed to see to be sold on it.

So, so incredibly cool in a rally game. Especially when the windshield got muddy, and it's an actual 3D windshield in front of you, so you can still see through it, even though it's smeared, instead of that flat "blob" on your screen when it's not in 3D VR, covering up your view. Very strange that your eyes can "focus" on something further in the distance and sort of look right through your muddy/smeared windshield, even though the actual screen is just inches from your face.

So tough to explain, but without VR at launch, I will likely not get DR 2.0 at launch.
Top

Day One purchase for me.

"You know why I love boxers? I love them because they face fear. And they face it alone." - Nick Charles

We did it guys! (Post-release) 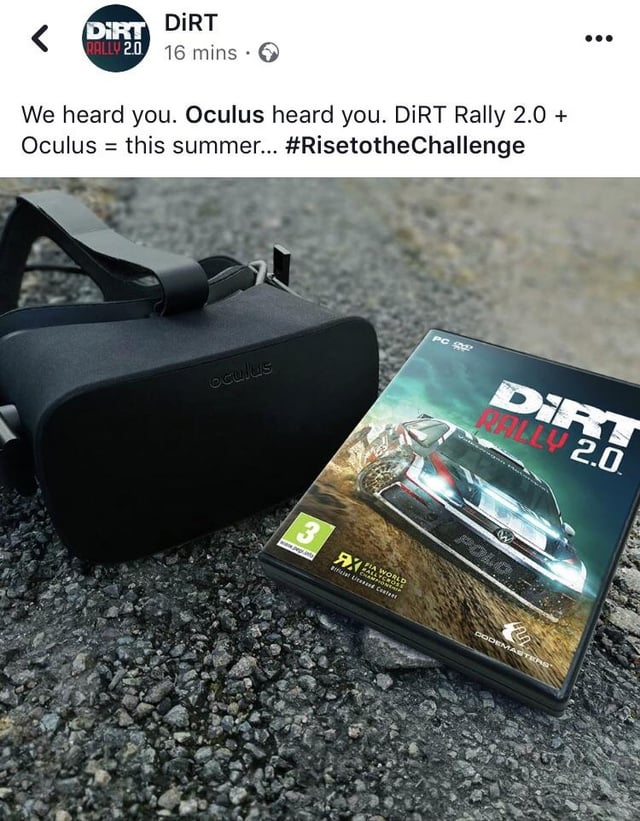 Thank you Codemasters!!! Now just bring on Rally GB and Finland and I will be so happy! My biggest concerns were no VR and lack of some of the best real world rally events from DiRT, particulalry Monte Carlo and Sweden. Glad to see they are coming even if it is DLC. I already have the digital deluxe version pre-loaded and ready to go on Xbox One!! Cannot wait for this release. I am so hoping they have expanded and upgraded the online league mode from the original DiRT.

Codemasters have revealed the first round of post release DLC for DiRT 2.0 - and it has plenty of very sweet content set to hit the sim.

With release day set for later this month, Codemasters have already taken the bold decision to announce the first wave of post release DLC content set to hit the rally driving simulation, and it is already taking shape to be a very, very impressive collection of both cars and rallies lined up to come to the title following public release.

Noted as the first "season" of DLC content, with more set to follow later, the first load of additional paid addons for the game will include no less than three returning rally events from the original DiRT Rally, spread over an 11 week post release period. Back and substantially upgraded from DiRT Rally comes the famous Monte Carlo, Swedish and German events, giving a nice mix of snow, ice and tarmac surfaces for players to sample the new physics and features of DiRT 2.0.

Also forming part of the 11 week update schedule will be new cars - notably the ŠKODA Fabia and Subaru Impreza fan favourites.. so plenty to get stuck into for players of the game.

“It was important for us to not just include brand new content for DiRT Rally 2.0, but also to recognise the fan favourites from the previous titles”, commented Ross Gowing, Chief Games Designer. Gowing continued, “The improvements the team have made for DiRT Rally 2.0 are plain to see, and Monte Carlo is a shining example of that. I think it looks incredible, and I hope our players feel the same way too. We are making a significant commitment to expanding the DiRT Rally 2.0 experience for the players that have been calling for us to do exactly that over a number of years.”
​
Fear not those of you who are thinking the returning rallies will merely be a rehash of DiRT Rally content - the new stages have undergone significant updates for inclusion in DiRT 2.0, enjoying visual upgrades thanks to the new lighting system, and of course benefitting from the new for DiRT 2.0 track materials improvements. Previews of the Monte Carlo rally stages can be seen in the images below, already looking considerably improved from what was a very solid baseline in DiRT Rally:

Week 1: ŠKODA Fabia Rally, Citroën C4 Rally
Week 3: Monte Carlo Rally, Special Livery
Week 5: BMW M1 Procar Rally, Opel Manta 400, Special Livery
Week 7: Sweden Rally
Week 9: Ford Focus RS Rally 2007, Subaru Impreza, Special Livery
Week 11: Germany Rally
Players who pre-order or buy the Deluxe Edition will have this Season One content, plus Season Two which contains a similar level of content and features, included as part of their Season Pass. Players who pre-order the Deluxe Edition will also have early access to the game from 22nd February 2019. Day One or Standard Edition players will have the opportunity to purchase each season and piece of content separately on their digital store of choice.

I also got this for Christmas in anticipation of DiRT 2.0 - Now I just need to figure out how to pay for the hand brake mod!

Good news, but I would be surprised if those are stage-for-stage replications of the Monte and other WRC events. Bigben still has the WRC license, I think.

Still, the Codies' interpretation of these real WRC rallies should be strong. Roll on, Feb. 26!
"You know why I love boxers? I love them because they face fear. And they face it alone." - Nick Charles

pk500 wrote:Good news, but I would be surprised if those are stage-for-stage replications of the Monte and other WRC events. Bigben still has the WRC license, I think.

Yes, and they will release their followup to the awesome WRC7 in September. Can't wait for that one either!
Top

pk500 wrote:Good news, but I would be surprised if those are stage-for-stage replications of the Monte and other WRC events. Bigben still has the WRC license, I think.

Yes, and they will release their followup to the awesome WRC7 in September. Can't wait for that one either!

https://www.youtube.com/watch?time_cont ... VlV2iSZVMw
"You know why I love boxers? I love them because they face fear. And they face it alone." - Nick Charles

There's a couple reviews already up on youtube.
Top

Can DiRT Rally 2.0 FINALLY De-throne Richard Burns Rally? - Jimmy Broadbent
-Always trust Jimmy's reviews and this quick first impression is promising, also seems to indicate that the AI is hard, opposite view of the PC Gamer review below
https://www.youtube.com/watch?v=_1AXmDmKB-Q

DiRT Rally 2.0 Review for PS4 Xbox One - IS IT WORTH IT?
-This review also seems to indicate that the AI is hard, opposite view of the PC Gamer review below
https://www.youtube.com/watch?v=JRYkT7E5VkQ

What these two deceptively different disciplines have in common in Dirt Rally 2.0 is that for the first few hours, you’ll win them incredibly easily. That’s not intended as a humblebrag: the AI really is that forgiving. Stack it even twice or three times on a single stage, and you might still expect to be towards the top of the classification with 20 seconds of penalties. Take an extra Joker lap—a longer layout of the circuit—by accident, and victory is by no means ruled out.

Speaking personally, that forgiving AI led to a sensation of ‘failing upwards’ as I took win after win without truly mastering either car or track. It’s probably intended as a means to make Dirt Rally 2.0 more accessible than its forefather, but I’m not sure it quite works. Perhaps a rally school, similar to the one prefacing the famously formidable Richard Burns Rally might have been a more effective solution. Stiffer competition awaits online of course via custom championships, and it’s here that Dirt Rally 2.0’s long-term appeal lies. A talented community of modders and racers crystallised around the previous game, and there’s every bit as much incentive for it to do so once more here.

Not that the series is too well-known for this, but DiRT Rally 2.0 is lacking in multiplayer modes at launch. Your only option for real-time racing is finding or setting up a custom championship for up to eight players. There are no clubs or any real sort of social gaming options in DiRT Rally 2.0. There are at least asynchronous challenges, whereby players compete for bragging rights on leaderboards. There are daily and weekly challenges, featuring anywhere from one to 10 stages each, and the asynchronous nature of rally racing fits right in with these challenges.

24 hours or so to go and I am getting very psyched up watching all these videos:

The Group B Cars In DiRT Rally 2.0 Are Bloody Brutal
-Who knew?

DiRT Rally 2.0: My Thoughts About The Game So Far
https://www.youtube.com/watch?v=2bKlbuCp2OM

Why DiRT Rally 2.0 is NOT for everyone | A Tribe Called Cars
https://www.youtube.com/watch?v=NO8fpTlTe4Q
Top

Got the Deluxe version downloaded and installed. Will get to sink my teeth into it this weekend.
Top
Post Reply
108 posts