Welcome to the Digital Sportspage forum.

For those who enjoyed Red Read Revolver. I happen to be one.

Screens available at the link above.

Developed by Rockstar San Diego, as a follow up to the 2004 hit game, Red Dead Revolver, Red Dead Redemption is a Western epic, set at the turn of the 20th century when the lawless and chaotic badlands began to give way to the expanding reach of government and the spread of the Industrial Age. The story of former outlaw, John Marston, Red Dead Redemption takes players on a great adventure across the American frontier.

"The team at San Diego have massively exceeded our expectations with the sheer depth of experiences in Red Dead Redemption," said Sam Houser, Founder of Rockstar Games. "The seamless combination of breathtaking beauty and intense action, all woven together with strong plotlines in a massive vibrant, rural environment is mind-blowing. We think this game helps to push the limits of what an open-world gaming experience can be."

Along the way, players will experience the heat of gunfights and battles, meet a host of unique characters, struggle against the harshness of one of the world's last remaining wildernesses, and ultimately pick their own precarious path through an epic story about the death of the Wild West and the gunslingers that inhabited it.
Top

Western style video games do interest me, so I'll be sure to follow up on the previews and reviews.

I LOVED Dead Red Revolver, one of my fav. games of last gen.
Top

Sadly, 20+ years later it's still the all-time best game with a Western setting:

"Ok I'm an elitist, but I have a healthy respect for people who don't measure up." --Aaron Sorkin
Top

Pssh that game has nothing on my favorite Western. 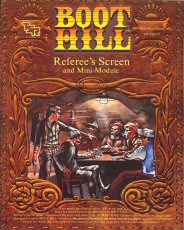 We have a winner. Had no idea that stuff even existed outside the realm of dragons, goblins, warriors and such.
Top

That trailer looks great. What's the release date on this?
Top

Just watched that a bit ago. As if I needed any trailer to buy this...

naples: Thank you. Had been waiting for the Dec 1 date, for the trailer

do not have any words. Never checked graphics which were more 'movie-like'. And then when you factor in the type of game it is (free roam) it is further difficult to believe. Personally, i love the GTA IV graphics and the said trailer makes GTA IV look like a previous generation title. I didn't expect this.

as a little boy, i remember my mom telling me 'a horse is the most difficult object for an artist to paint/draw', becuz of the muscles they have. The horses in this trailer look like film.
Top

I know. The setting/atmosphere looks crazy!

As if April wasn't far enough away. Good lord this looks awesome!

Thanks for the link teal. That was very informative. After watching that I'm much more enthusiastic about this game. I played a little bit of the first one but it never hooked me. I love westerns and always thought the only way to really capture the feeling of a true western would be with a GTA open world approach.
"Be tolerant of those who describe a sporting moment as their best ever. We do not lack imagination, nor have we had sad and barren lives; it is just that real life is paler, duller, and contains less potential for unexpected delirium." -Nick Hornby
Top

As if April wasn't far enough away. Good lord this looks awesome!


I don't know if Red Dead Redemption will be the greatest videogame of all-time. But to me, GTA IV was. And this game looks even better
Top

I hope Rockstar improves upon GTA IV's Euphoria engine. For me, the control lag in that game robbed me of the fun it offered, save for the driving engine. Otherwise, this one is truly draw dropping!
Top
Post Reply
659 posts